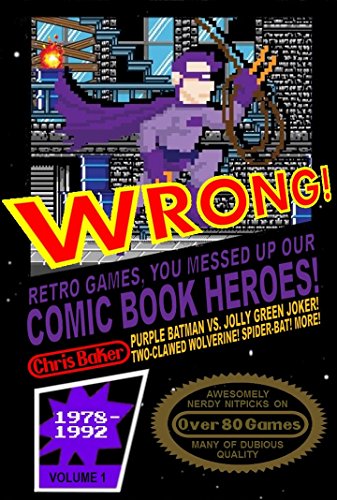 THE MOST MESSED-UP MOMENTS FROM 14 YEARS OF SUPERHERO VIDEO GAMES – AWESOMELY NERDY NITPICKS!

If you're a superhero fan who loves video games, you've experienced firsthand how pretty much every title out there – good or bad, remembered or forgotten – does something that's absolutely, unapologetically WRONG! with its source material. This ebook documents the most egregious – and most hilarious – offenders from the moment Superman flew onto the Atari 2600 in 1978 all the way through 1992, when Konami's classic X-Men sucked in quarter after quarter in arcades.

Some you've played. Some you haven't. And quite a few you never even knew existed in the first place. Some high-/lowlights:

ANSWERS TO BURNING QUESTIONS YOU DIDN'T EVEN KNOW TO ASK

YOUR FAVORITE HEROES (AND SOME YOU'VE NEVER HEARD OF)

ABOUT THE DUDE WHO WROTE THIS STUFF

With years-long stints at Marvel and LucasArts (you know...home to Star Wars games), Chris Baker has played a role in the release of more than 40 game releases since 2005. To name a few: Marvel vs. Capcom 3, LEGO Marvel Super Heroes, Spider-Man: Shattered Dimensions, Marvel Pinball, Star Wars Battlefront II, LEGO Star Wars II...plus quite a few he'd rather not mention while trying to make himself sound awesome. He also worked in the games press from 1998-2005, most notably as an editor at Official U.S. PlayStation Magazine, where he wrote about hundreds of games.